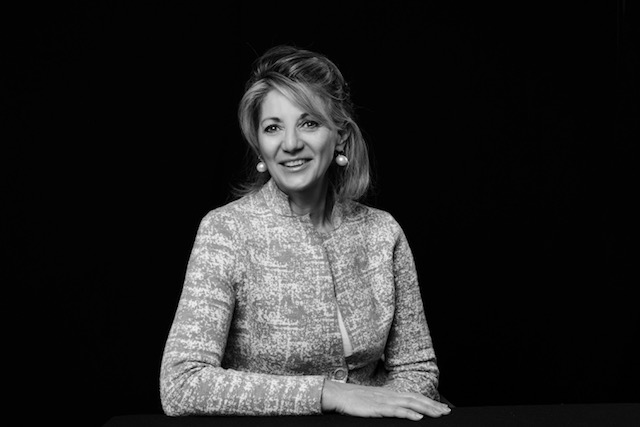 Romana Vanacore was born in 1958 and lives and works in Rome.
She teaches ceramics at the Scuola d’Arte Nicola Zabaglia since 1984. In 1980, she started working steadily on her own artistic production taking courses in ceramic techniques, decoration, restoration, reduction firing, Raku, bucchero and lustres. She has participated in several personal and collective exhibitions both in Italy and abroad.

Her current personal expressive and experimental course concentrates on shapes and surfaces and their potential for transformation.
The techniques and materials utilized to progress in her artistic path ranges from Raku firing, a rapid firing technique that sees a reduction process on pieces at their incandescent state, to Pit fire, High temperatures, Grès, Porcelain, and Paper clay.

“My research is aimed to revisiting ancient working and firing techniques. I use clays of different origin and I test their different plastic and expressive potential. A significant side of my works is the necessity of letting the opposites live together and communicate each other by the use of colors and by the work on the surfaces which can turn from very smooth to rugged and rich of breaks.”

The experimental field of Romana Vanacore, young potter who lives and works in Rome, is made of traditional objects – a bowl, a vase – approaching her research like an inquiry that seems to run through the veins of this archetypal form. Careful inspection of the thin walls, taken almost to their limit, calls into question the function of the form and favors the plasticity. The process of assembling repeated shapes together puts the resulting work on a level where its rhythmic component is fully captured and perceived. Manual intervention changes the original shape and takes it to a sculptural level, yet it never negates the basic entity of the object which, adequately contextualized, becomes an independent element. Because the artist focuses her attention on the structural aspect, the choice of color is limited to the simplicity of black and white. The firing process, which relies on astute fortuity that gives rise to the character of the glazes and crazing qualities, expresses composite willfulness from which a conceptual background emerges. The Raku firing technique, studied in depth by the artist, stabilizes the work in dark grays with vibrant bodily surfaces that confer on the object a sense of lightness and sensitivity.
Luciano Marziano

Works 2013-2016
Hollow shapes, like multiplied shells, aggregations of madrepore spreading over ideal irregular surfaces. Porcelain, mixed with vegetal fibers, generating rings that gracefully connect.
Free, almost self-reproducing shapes manifest a soul that can be found in their details.
White. White is the silver thread of Romana Vanacore’s most recent recherché.
The brightness of such shapes, unbelievably modeled by a human hand, is striking.
In ”In fondo al mare”, reflecting, shiny or matt elements create unique concretions.
A syncopated, yet not obsessive, rhythm, beautified by a sense of balance can be perceived.
Then suddenly, in 2014, a change of direction. A diversion.
No more from balance, and sense of rhythm. The modular elements, inspired by living forms, disappear.
In the “Respiro” series, fleshy clay paste entangles into involutions, knots, twists, and creates a brand new physical universe, a magma that RV contains into regular shapes.
The artist tries to contain the dramatic nature of chance. A 180 degree turn takes the artist from the representation of a systematic universe to the drama of the unpredictable.
From this phase, the artist endeavors gradually to find a rule, order, balance again.
It is a long road: a step-by-step process that will make her able to recover the rhythm.
In” Divenire”, still enclosed within definite boundaries, ribbon-shaped elements replace the viscous, magmatic element. It is a a first step, almost a dance, back to the origin of material.
In “ 46 profili” ancient shapes turn into known profiles. Contours emerge thanks to a refined play of light and dark in a two-dimensional reality where distant memories are evoked.
A unique piece of work, arrival and starting point at the same time.
This is the starting point of Romana Vanacore’s new tridimensional quest.
“Silhouette”, with its 180 and 360 degree versions, materializes with geometric accuracy reality and illusion and prepares the ground for “Forme dinamiche”, a creation capable of evoking ancient Futurist memories.
With the following “Nike”, the artist recovers the calm freedom of plasticity and abandons herself to the game of laying down smooth lines onto classical forms.
2013-2016: three years of intense activity by an artist who identifies the main theme of her existence with artistic exploration.
Laura Mocci

Romana Vanacore’s work on the footprints of Nature
Romana Vanacore found in ceramics her medium as an artist. She is not strictly a ceramist, although the term would not be entirely inappropriate given her expertise in all the traditional techniques. The term “ceramist” typically evokes artisanal practices, while the artist, albeit relying often on traditional forms, arrives at entirely new results.

Since the early ‘90s, the artist has reinterpreted the theme of the vase and the bowl in relation to shape, as well as in relation to the dialectic between decorative aspects of the shape and shape itself, thus generating a significant change in perception. The work produced since that period is made of brown clay worked with the coil and the slab techniques, decorated with slip and glaze, and fired with Raku and Naked Raku techniques. During the period beginning in 2000, the artist experiments with fireclay and pit firing. Later on, she works with more refined materials such as porcelain, stoneware, paper clay, and enamels used in high temperature firings. She designs slabs of porcelain with copper wire, and during firing, the wire melts within the clay. She also experiments with making mosaics with porcelain.

Always present is the love for clay, a material so malleable as to be able to assume a multitude of shapes, always suggestive of the primordial act of divine creation. Romana Vanacore’s act is dictated by a reverent homage to creation, while suffused with utter awareness of the unattainability of divine creation. Even so, it remains the artist’s absolute point of reference.

There is in Romana Vanacore’s work an evident reference to the Arte Informale movement, with which she shares an interest in the expressive and emotional potential of material over shape. This is precisely what the artist does in her work, continually experimenting with new techniques and material permutations, always manipulating one of the elements of the work, whether firing time or type of clay. Although the control of the artist is present, the final result is never entirely expected, but contains an element of randomness. Vanacore’s interest in manipulating the material is partly inspired by Burri, the most influential Italian artist of the Arte Informale movement, particularly his inquiry on the nature of surface, which led him to create his crackled pieces. Similarly, Romana Vanacore’s surfaces are smooth or coarse, glossy or opaque, fluid or rippled, defined by fissures or flakes that concave or convex, taut or folded over; each effect creates a specific solution to form and surface, and between full and empty and in which shadow has a clear chromatic function.

Apart, however, from the infinite technical variations in her work, the principle on which Romana Vanacore relies is what the ancients called the great book of nature. Her work is born from the desert, the deep sea, and from karst lands. The artist finds the beauty of nature in its most secret and intimate dimension, that which is visible in the telescope or the microscope, or in the less frequented terrestrial environment. She believes that shape develops from nature, from crystal to tectonics, from egg to seashell. In this sense, her work is both archaic and current.

With the execution of each work, the artist seems to want to appropriate for her art a secret that nature is still hiding. While she is aware that the ultimate mysteries are unfathomable, such appropriation allows her to grow humanly and artistically.
Stefania Severi